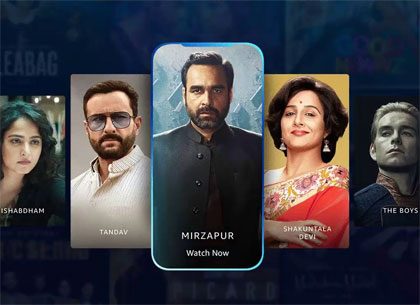 Amazon Prime Video has now revealed the secret behind the missing ‘ME’ and all this hype was for the ‘mobile version’ which is launching a global streaming giant in India in partnership with telecom service provider Airtel India. India has become the first country in the world for this Amazon Video Mobile Edition plan.

According to Amazon prime video, It is the first worldwide launch of the Prime Video mobile version in India and will provide mobile-only access to all Amazon originals, movies and shows. The mobile version will be available for prepaid customers of Airtel India from today.

Amazon Prime Video had launched a ‘When is ME’ campaign by removing the ME from Priyam on its handle and displaying images on various social media. It later surrounded many TV celebrities such as Shehnaaz Gill, Priyank Sharma, Divya Aggarwal, Gauhar Khan. The missing ME resulted in a meme celebration on Twitter and Instagram, with Memors taking it to another hilarious level.

Under this mobile version, starting from 89 89 per month, customers will only be able to stream Prime video content in standard definition (and high definition) via the Prime Video app on Android or iOS. The plan is for a user on a mobile device. Also, this mobile version is only valid for Amazon’s video streaming service and will not include other major benefits such as shopping, free shipping, ad-free music, etc. which are available under the normal subscription package.

Netflix already has a mobile that costs ₹ 199 per month, which is available on all telecom networks operating in India since July last year. However, of late, Amazon has gained an edge over Netflix with its mobile version, as their respective plans have a difference of more than twice the rates. In fact, Amazon Prime Video has always been a winner when it was compared with Netflix in terms of overall subscription plan rates.

The only major issue here is that this offer is only available to prepaid users of Airtel India. In this latest Amazon Prime Video mobile version, Airtel users get 30 days free trial with all prepaid bundles. After the free trial period ends, there are two variants of the recharge plan for Prime Video Mobile Edition subscription, the first being Amazon 89 which bundles the Amazon Prime Video mobile version and 6GB of data for 28 days. The second pre is a 299 prepaid bundle with Amazon Prime Video Mobile Edition subscription, unlimited local and national voice calls, 1.5GB data per day valid for 28 days.

The full pre-existing Amazon Prime subscription package remains unchanged and anyone can take advantage of it. This latest mobile version of Amazon Prime Video is a way to penetrate deep into the Indian market and increase its customer base by attracting a new set of viewers with cheap attractive schemes. It takes advantage of ubiquitous Internet-powered smart phones across India, including remote locations.