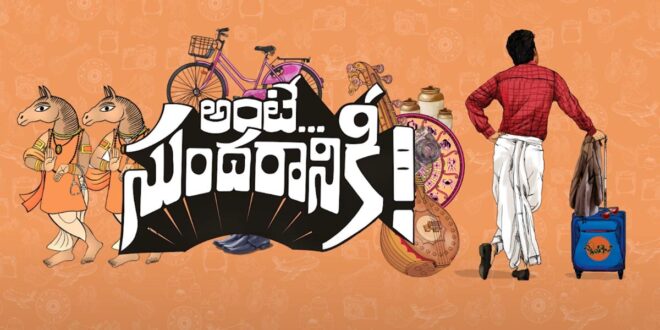 Ever since the title of the teaser lifting Ante Sundaraniki has surfaced, many people are wondering what this gossip alert is. The teaser begins with a fight by people about something and comedian Harshvardhan asks him to step down. Nani reveals her secret to Harshvardhan and Harshvardhan reveals this top secret about Sundaram. What is the top secret?

Inside there is discussion that Sundaram (Nani) is rumored to be an “eunuch”. In fact, the film’s title “Ante Sundernik” is an unfinished title that will be completed by this gossip. And this rumor about Sundaram gets leaked on everyone. This sets the fun and humor in the film. And here the twist in the film comes when the heroine (Nazrin Fahd) claims to be pregnant because of Sundaram. It is revealed that director Vivek Atreya has done a laugh-riot comedy between these two aspects in the film. And in the end it is known that these two are not true because they are just gossip.

Since the term Ente is commonly used to convey information to others, this gossip on Sundaram justifies the title. The title itself brings laughter, with gossip and humor setup increasing the possibilities on film. Nani seems to be trying to play a more unusual role and her getup is uproar.

While filming will begin soon, the film has been announced for release in 2021.