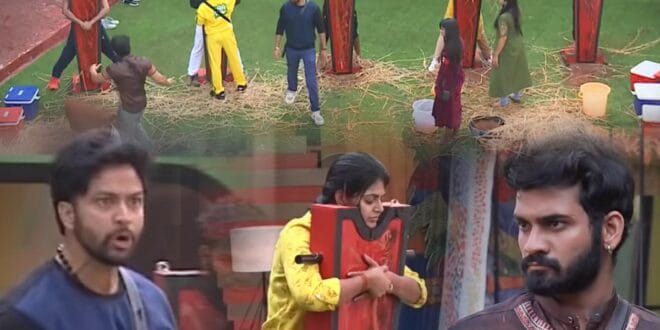 Bigg Boss Telugu season 4 has consistently been in tight space for its monotonous tasks and passive contestants. However, the season took several turns due to its episode 59. The episode begins with Abhijeet nominating Amma Rajasekhar and stating that this is the reason, Amma Rajasekhar does not let anyone speak or say anything against him. This caused a very aggressive reaction from Amma Rajasekhar and when Avinash and Harika intervened, they shouted to silence Harika. The ever calm Abhijeet returned his cold and shouting at Amma Rajasekhar that he would not remain silent as he was fed up of doing so.

The next nomination that shocked everyone was Akhil’s nomination of Monal. Akhil, stating his reason, said that Monal is very confused and does not work like others. However, Monal had something else to say and accused Akhil of only wanting friendship with Amma Rajasekhar. This led to many mixed reactions with netizens on Twitter. Everyone is confused as to why Akhil will nominate Monal. Some consider it Akhil’s game plan while others say it was high time.

The next day the nominated contestants were given a chance to fight for immunity. He had to protect his face and put it on a tea stand without shaking his face. Contestants stayed in this position for more than two hours. However, there was a controversy because of the contestants who had favored Sohail, Mehboob and Akhil. There was a big fight between Akhil and Sohail as Akhil was trying to help Monal due to which Mehboob and Sohail drove Akhil out.

Abhijeet left the stand after some time saying that the line was being crossed and he would not lose his self-esteem due to an act. Meanwhile, Harika is told that she can no longer participate due to shaking her head from the tea stand. However, all the others were nominated as three people stood still. The episode garnered some critical opinion from netizens and no one is happy with the act.