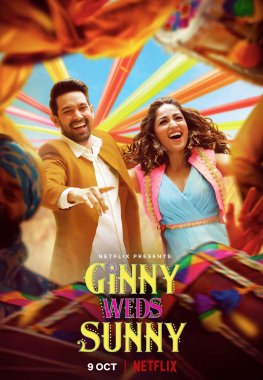 Ginni Weds Sunny Review: Vikrant Massey (Sunny) and Yami Gautam (Ginni) have been brilliant in their performances, but the story offers the same kind of plot in the 90s. There could have been a better story, which could have helped make the film better than average, but sadly it failed to do so.

Both his parents are now tired of trying to get him married. Ginni’s mother (Ayesha Raza Mishra) tries to find a good husband for Ginni in his own hands. But the problem is that Ginni wants to have a love marriage. Therefore, her mother conspired with Sunny to plan a plan for her daughter to fall in love.

Thus, a long series of wooing begins where Sunny does all that Ginni’s mother tells her so that Ginni falls in love with him and forgets her ex-boyfriend Nishank (Suhail Nayyar). Ginni still has feelings for Nishank and is still waiting for him to propose to her. With Sunny wooing Ginny, Ginni wants to propose to Nishank, Nishank wants him to spin himself, the story becomes so insensitive and goofy that you would be forced to ask the real reason behind all these fights. Huh.

With all this happening, as an audience, you will feel lost in the plot, as it does the bare minimum to grab your attention for a long time. The characters are not given real objectives. Like, crush this childhood of Jinny with whom he shares his first kiss, time and then, he keeps popping up to eat bitter gourd And aloo ke parathe, But has no real motive.

Sunny looks like someone who does nothing but dream about her wedding and later open her own restaurant. It seems like everyone has only one purpose in life in the film – it is either to see themselves getting married or to marry someone else. word ‘Shaadi’ The film has been repeated so many times that you feel that you should get married so that everyone stops talking about weddings.

The entire plot is a trope wedding, there is nothing behind it, and there is nothing ahead of it. We are living in the twenty-first century, there are more important issues than marriage, such as Sunny’s unemployment, Nishank’s financial dependence on his family, etc. But for us Indians, the main purpose of one’s life should and should be. ‘Shaadi’, Everything else can wait.

I know the name of the film is Ginni Weds Sunny, but other ideas can also be introduced in the film to divert viewers’ attention. But not! This suggests that there are some real flaws in the plot. The author has borrowed a lot from all the romantic films that have been made so far, mixed them all, and brought in a new mixed version of all the stories. Except for a small part where Ginni talks about her father, the story does not emotionally connect with the audience.

“I would like to say that the story has spoiled all the acting efforts made by Vikrant and Yami,” Ghani said in a review of Sunny. Vikrant slipped into this role so comfortably, that at one point of time, it was difficult for me to believe that West Delhi does not have a boy in real life. His Punjabi accent comes out in such a fluent way that we enjoy watching him on screen. He has done full justice to his character.

Yami has also left an indelible mark with her character. She looks effortlessly beautiful and seems to have worked a lot on her acting skills over the years. He has tried to get under the skin of his character, fulfilling the Haryanvi-Punjabi accent and became a treat to watch.

The film, though based in Delhi, fails to capture the beauty of Delhi in any way other than the metros. Delhi is such a beautiful city that there is a lot to roam around, but in no way do the manufacturers take the risk. Same old Dhabas are shown.

In a review of Ginni Weds Sunny, I would also like to say that the music is awesome, with some choppy numbers that give the screenplay a nice vibe. There is also a slow song, which will make the film somewhat less painful, but other than that, the film is not so exciting. You want to watch the film because of its background score.

Directing by Puneet Khanna is also not very impressive, as he had talented actors, but did not channelize on the occasion and presented a brilliant Ginni Weds Sunny. The film would have been much better than it was now, if he had been able to spot the actors to their utmost potential.

The cinematography is good in some scenes, for example, when the wedding is taking place in Noor Mahal. But, in some scenes, it lacks creativity. As I said earlier, set in Delhi, the film fails to capture the essence of Delhi, apart from a few scenes from India Gate, Delhi Metro and the local. Dhabas. Could have done a better job.

NAWAZUDDIN SIDDIQI’S Critical Review: The Story of a Member Community

Ginny Weds Sunny has one more thing to review, the screenplay is not up to the mark. It could be given such a shape to ensure that the audience’s attention remains for a long time.

Finally, for the review of Ginny Weds Sunny, I would like to say that it is a passive film. You can watch it if you are free for two hours and want a light watch. You may also want to watch the film due to its good music. This is the only thing worth enjoying in the film, sadly.