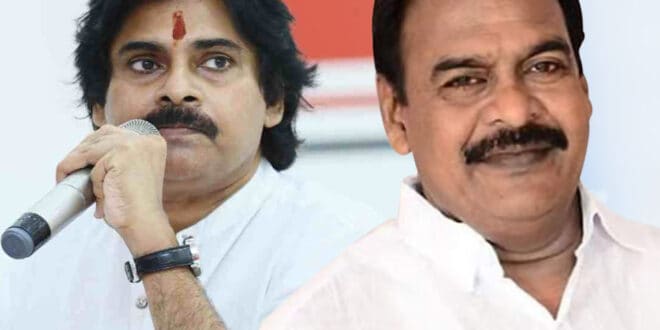 When an MLA of the opposition blames the ruling party, he has to bear the consequences. First the opposition suspended him from the party and later filed a disqualification against the MLA. But we know that power and politics are always in the hands of the ruling party and the defective legislator is safe for the entire term. Currently the only Jan Sena party MLA Rapka Vara Prasad is enjoying this trend.

After winning the election, Rapaka’s name made a big noise in the Jan Sena party. To Pradhan Pawan, Rapaka assured him that he would voice the concerns of the people in the assembly. But in no time Rapka changed the tune and moved closer to the YCP government and even supported the ‘Three Capital’. Despite unfurling the rebel flag, Pawan did not take any action against Rapaka and the Rezol MLA got wings. Taking this as an advantage on several occasions, Rapaka criticized Pawan, yet the Jana Sena boss has no reaction. Pawan once remarked that he had no clue about the problems of Rapaka being in opposition and so he moved to the ruling party.

But no more as Pawan has decided to reply to Rapaka for his comments and anti-party activities. Recently Pawan visited Amravati and met Janasena leaders and party workers from the coastal districts. He discussed about the active membership campaign, in which Razol constituency emerged in the first place. For this, it was the local party cadre who worked hard and was completely influenced by Pawan Kama.

Pawan later met and interacted with Rajole Janasena leaders. In it, the leaders have mentioned about local body elections which are far from the radar and Pawan instructed them to work very hard to ensure the victory of the party. Regarding Rapaka, Pawan informs the leaders that if the party wins in Rajol, there will be a tight slap on the MLA’s face for betraying the party. In this way Pawan plans a ‘return gift’ to Rapaka.