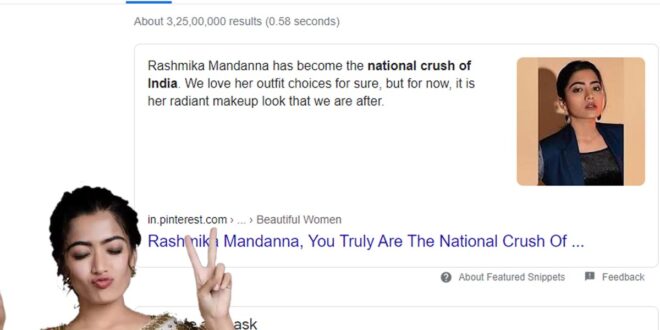 Rashmika Mandana is one of the top heroines in Tollywood right now. After making her debut in Kannada from the film Kirik Party, the actress later earned stardom in Telugu. With Telugu being a back-to-back hit, Rashmika has just become the highest-grossing heroine in Telugu. The actress went on to become a major success with Vijay Devarakonda starrer Geeta Govindam. She is also part of Sarleeru Nikevaru, a big blockbuster starring Mahesh Babu, released this year. Surprisingly, Google is showing Rashmika Mandana as India’s national crush.

If you search for ‘National Crush of India 2020’ on Google, it shows only one result. Google displays the picture of Rashmika Mandanna and also details the same. Rashmika Mandana has become the national crush of India. We love her outfit choices to be sure, but for now, it is her bright makeup look that we are after, ”read a caption with a photo on Panterest.

Rashmika did not do any films in Hindi, but only acted in Kannada and Telugu films. She will step into Tamil cinema next year. His Telugu films Bhishma, Geeta Govindam, Sarilaru Nikevaru, Chalo and others were dubbed into Hindi.

Although Rashmika does not really enjoy a fan base in the north, she attained the status of India’s national crush on Google. Disha Patani, Priya Prakash and Manushi Chhillar were the national crushes of India for the last few years.