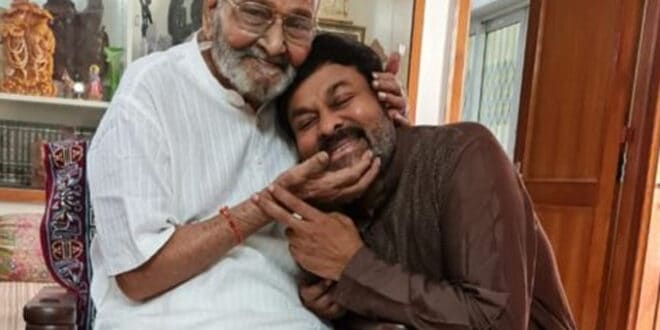 Chiranjeevi’s meeting with veteran director and nonagenarian (90-year-old) Vishwanath has become a topic of discussion. Chiru along with his wife Surekha met K Vishwanath on the eve of Diwali and took his blessings. Now this is being pointed out.

When some media representatives questioned Telangana Public Health Director G. Srinivasa Rao on the public boycott of Chiranjeevi, he made it clear. “No Kovid test is 100 percent accurate. Anyone who tests positive once must strictly follow Kovid’s guidelines set by the ICMR, whether it is symptomatic or asymptomatic, or whether a negative test has been performed. There are clear instructions by the ICMR. I urge everyone to follow them. Even after the vaccine is available, the person must maintain physical distance and fully use the mask to prevent the spread of the corona virus. “

Chiru, who initially tested ‘positive’ for the corona virus and confirmed the same, has subsequently announced that all subsequent Kovid test results indicated that he is ‘negative’ for Kovid. In a latest statement, Chiru said his first reported result was “incorrect” and said it was due to a “faulty” RT-PCR test kit. Chiru said that he suspected the initial result as he had no symptoms and had not developed any symptoms of Kovid for the first two days.

Chiru is said to have undergone several Kovid tests at various testing centers and all showed him to be negative. Even though Chiru claims she is not infected with the corona virus and the initial report was inaccurate due to an incorrect RT-PCR test kit, many state that Chiru must have been in quarantine. Telangana Public Health Director G Srinivasa Rao also opposed it.