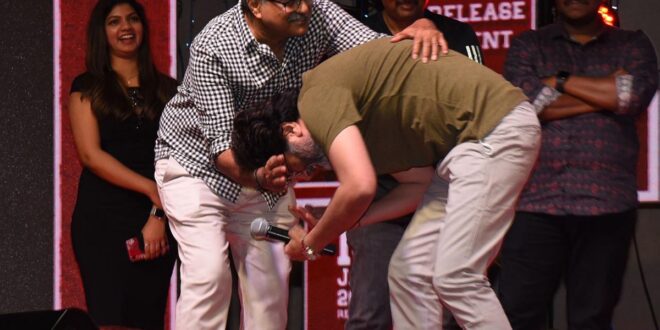 Trivikram Srinivas is one of the star directors in the Tollywood film industry. Before making her debut with Nuvve Nuvve, Trivikram worked as a writer for several hit films such as Nuvvu Kavali, Nuvvu Naku Nachav, Malleswari and others. Trivikram shared a very good rapport with producer Shravanati Ravi Kishore who gave him his first chance as a director. However, after Nuvve Nuvve, the director and producer never got a chance to work together.

“My relationship with Ravi Kishore Garu is a long one. I consider him my elder brother. We worked on films like Nuvvu Naku Nachv, Nuvvu Kavali and Nuvvu Nuvvay. We share a great relationship. Today, I want to take this as an opportunity to show my respect to the producer, ”said Trivikram and touched Ravi Kishore’s feet which came as a surprise to all. Even Ravi Kishore did not expect this. He immediately responded and hugged Trivikram.

Usually, Trivikram Srinivas is not a passionate figure in public events. He gets emotional, but will not express it like he did at the pre-release event of RED.