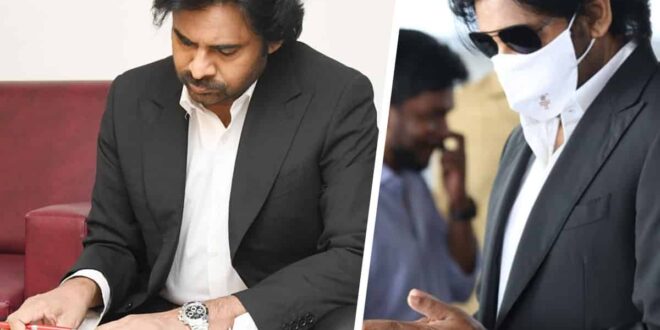 Pawan Kalyan rode the metro yesterday when he was going to Miyapur for shooting Wakeel Saab. He was accompanied by Dil Raju and other security personnel. An actor-politician going for a local metro train ride was praised by many with simplicity and swag, but there were others who found the most expensive watch in the photos.

Pawan Kalyan was seen wearing a Rolex, which costs around Rs 40 lakh. While his fans and fans are all smiling for his simplicity in style, questions on his watch began to haunt him. Pawan Kalyan’s fans had to explain that he wore that watch as part of the shooting of the film Wakeel Saab. Pawan Kalyan was seen wearing the same watch in Wakeel Saab’s First Look Motion poster and for continuity, he is still wearing it.

Well, many fans are still arguing over what is wrong if he wears a Rolex when he owns one? Even if for look-continuity, Pawan Kalyan’s dress or accessories do not speak for his simplicity or otherwise. For instance, superstar Rajinikanth is often praised for his simplicity and grounded nature, but he drives a Lamborghini Urus and lives in a palatial palace.

When Pawan Kalyan said that he had to come back to films to make a living and run his own political party, he did not mean that he was destitute. It might be better to criticize your bad choice of films and political tricks, rather than point to your baggage to prove that it is not simple.