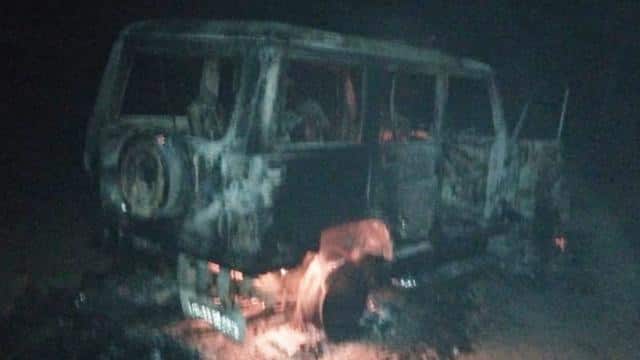 A youth was shot dead by miscreants on the Bhaisahi River Bridge on Tuesday night near Asarpur village in Chiriyakot police station area of ​​Mau. The youth went with his seven comrades to join the police. People got angry due to the incident. People burned police automobiles and bikes. Put the dead body on the highway and put it in place. The police did not dare to go for hours on the spot. The cause of the incident is formerly claimed to be a younger man with Pradhan’s murdered son a year and a half ago.

27-year-old Arvind Kumar, hailing from Asalpur, along with seven of his comrades was working regularly with the police. At around 8.30 pm, the crooks reached here and surrounded the young man. Seeing the actual scenario in the arms of the crooks, the opposite companions escaped by chance. In this manner, the miscreants fired at the younger man. He died on the spot due to multiple bullets.

As soon as the data was received, many villagers reached the scene. The dead cornered the siege and laid siege to the highway. After receiving the data, the villagers surrounded 112 police automobiles on the spot. So a soldier arrived there with his bike. Angry villagers set fire to police automobiles and bikes. Somehow the policemen escaped from the spot after saving their lives. Seeing the anger of the villagers, the police could not dare to go to the spot for hours. Villagers stood firm on the demand for the arrest of the killers.

There is a risk in connection with the accused of killing the village head Munna Rao in the last year and a half in Arvind’s house in Asalpur of Chiriyakot. In this, a reward of Rs 50,000 has been kept for identifying Rahul Singh. Villagers are apprehensive about this murder on the spot. Police chief Rupesh Kumar Singh says efforts are underway to arrest the miscreants.